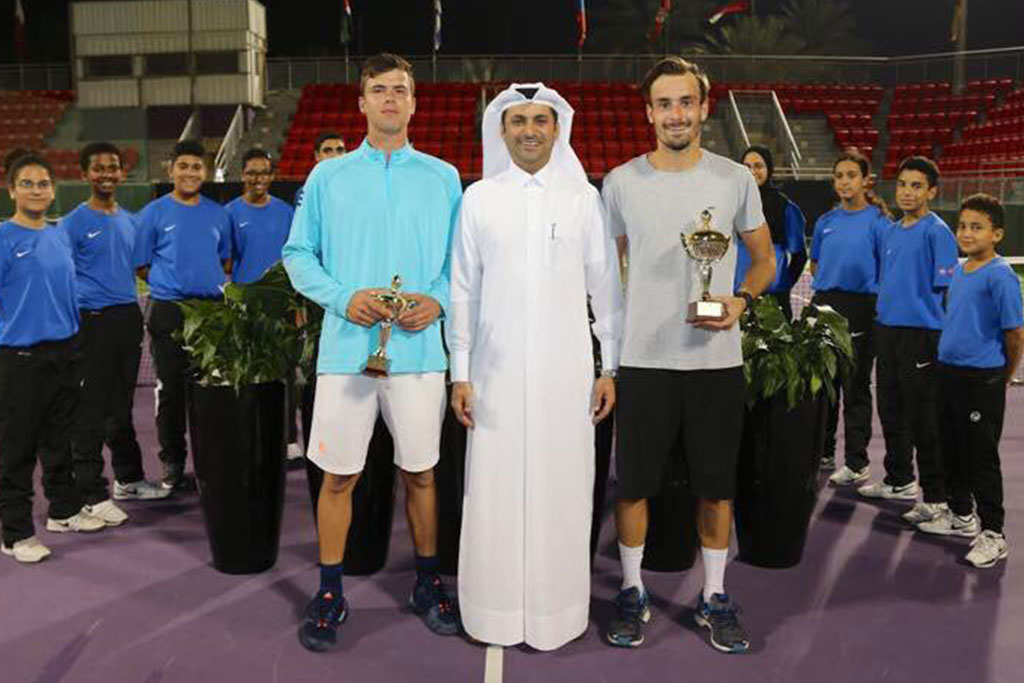 Antoine Escoffier of France claimed the title of Qatar F2 Futures Tournament organized by the Qatar Tennis, Squash and Badminton Federation (QTSBF) in cooperation with the International Tennis Federation.

The French world number 551 won the singles title after beating Daniel Altmaier of Germany 6-2 7-6 6-4 in the final match.

The crowning ceremony was attended by the QTSBF Executive Director and Tournament Director Saad Al Mohannadi and Director of Local Tournament Sultan Khalfan.

Antoine Escoffier was delighted by his victory and said that the final match was so tough against his German competitor that’s why he needed three sets to decide its result.

Escoffier lauded the high level of organization and facilities available at the Khalifa Tennis and Squash Complex. He also said that he is aiming at entering the world’s top 100 players.

On the other hand, the Swedish duo of Markus Eriksson and Milos Sekulic claimed the title of doubles event after beating Daniel Altmaier of Germany and Lucas Miedler of Austria 7-5 3-6 [10-7] in the final match.

The main draw of the Qatar F3 Futures will begin at the Khalifa International Tennis and Squash Complex on Monday. To conclude on Saturday, the event brings together 56 players.

The QTSBF Executive Director said that the federation is proud of hosting the futures tournaments which were able to occupy a good position in the Federation’s agenda because they contribute to the development of the Qatari players.

“The Federation spares no effort to provide all the possible support to the Qatar players and to promote tennis in the state of Qatar” He added.
The futures tournaments are organized under the supervision of the International Tennis Federation to provide the young players with the opportunity to improve their world ranking.

In the semifinals, Rashed Nawaf will clash against Tanapatt Nirundorn of Thailand.