Czech’s Tomas Berdych and Stanislas Wawrinka of Switzerland arrived in Doha on Wednesday to participate in the Qatar ExxonMobil Tennis Open 2019 which begins at the Khalifa Tennis and Squash Complex next Monday.

The two star players are among the early arrivals for the ATP World Tour 250 series tournament which will be held until January 5, 2019.

Berdych, a finalist at the 2015 edition, flew in from Prague while Wawrinka, a three-time Grand Slam champion and a runner-up at the 2008 tournament, came in from Geneva.

The players were received at the airport by top officials of the Qatar Tennis Federation Led by Tournament director Karim Alami.

Qatar ExxonMobil Open, which has featured some of the biggest name in tennis down the years, is seen as the curtain raiser for the ATP tour.

Tickets for the event are currently on sale online at www.qatartennis.org or onsite at the City Centre, Landmark ,Villaggio malls and Khalifa Complex. 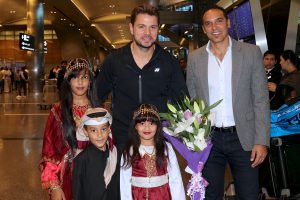