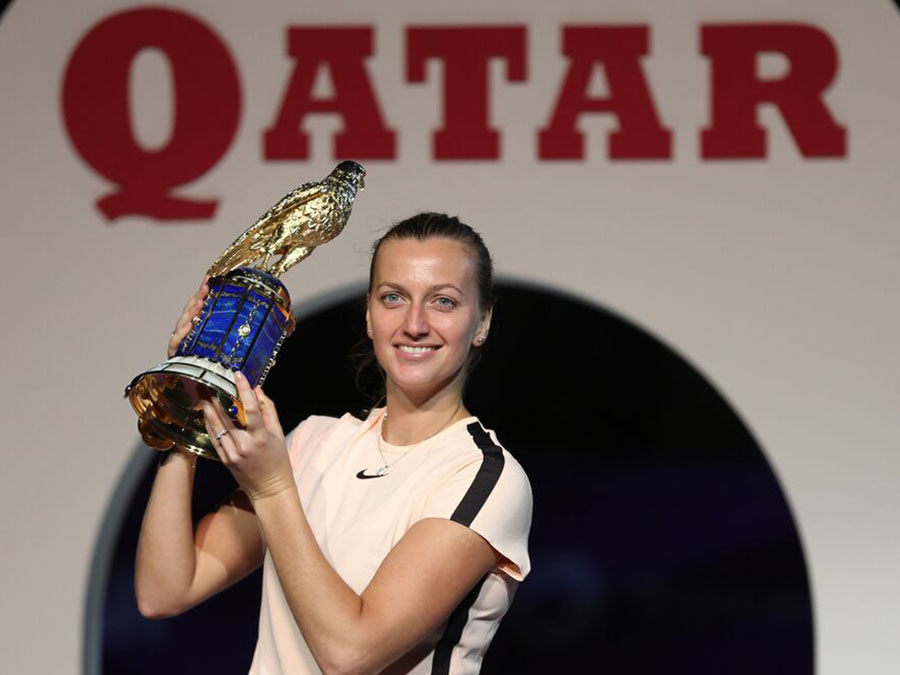 Czech Republic’s Petra Kvitova fought back from a set down against Garbine Muguruza to clinch the Qatar Total Open 2018 title and the $591,750 winner’s cash prize in Doha on Sunday.

The 27-year-old player, a two-time Wimbledon champion, needed another three-setter to beat the fourth-seeded Spaniard 3-6, 6-3, 6-4 to claim her 13th straight win, a 22nd career tournament victory and second consecutive title. The victory in Doha has now catapulted her back into the world’s top-10.

It is the first time Kvitova has been ranked among the world’s elite since a horrific knife attack at her home in December 2016 left her with an injured hand.

Kvitova was in trouble as she trailed 5-0 in the first set with fourth seed Muguruza looking to snap the Czech’s winning streak at 12 matches.

But the former world number two Kvitova dug deep to take the contest into a decider and ground out the victory. Asked how she managed to turn the contest around, Kvitova said: “I have no idea. I just tried. It was a really tough match, a big fight and hopefully the people enjoyed it.” Kvitova was forced to take a break from tennis after being attacked by a knife-wielding intruder at her home in 2016.

She returned to action after surgery on her playing hand last year but fell short of the top 10. “It feels great (to be in the top 10),” Kvitova said. “I mean, first of all, I think that it feels much better right now because top 10 is the number. Of course, it’s such a great achievement to be back there.

“I couldn’t really dream about it one year ago when I was in (a) total different position trying to come back and play. And for me, it’s something that’s amazing. “I couldn’t really wish for more. I played great tennis, St Petersburg and here as well. So that means a lot to me.” Kvitova’s return to form will put her back in contention for majors this season. “That’s why I came back, to try to have great results in the grand slams and the big tournaments,” she said.