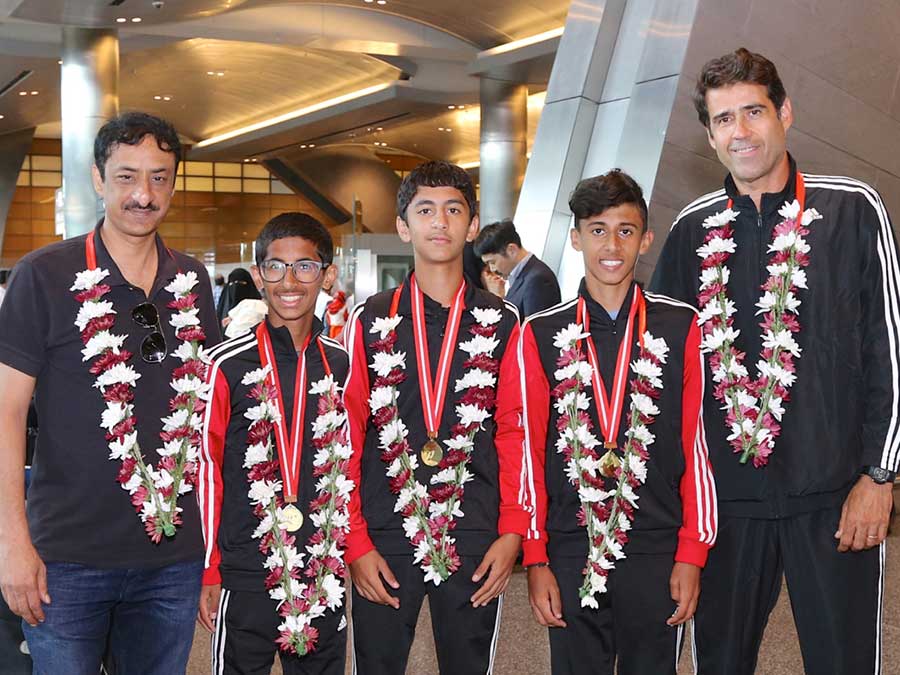 The delegation of Qatar Junior Tennis team, who qualified to the 2018 Asia Oceania Qualifying event of Junior Davis Cup, returned home to a warm welcome on Sunday.

The Qatari delegation was received in Doha by Ibrahim Al Khelaifi, Deputy Chairman of National Teams Committee at the Qatar Tennis, Squash and Badminton Federation and Ahmad Batti, Chairman of Public Relations Committee in addition to a large number of administrators and coaches.

The Qatari team secured their place in qualifying event after taking the second place in the 2018 Asia Oceania Pre-Qualifying concluded in Colombo, Sri Lanka on Saturday.

In the final match, Qatar suffered a 1-2 defeat against hosts Sri Lanka.

The Qatari team began their campaign in the event with a 2-1 victory over Pakistan then defeated Philippines 2-1 in the quarterfinals before edging past Malaysia in the semifinals.

Ibrahim Al Sulaiti, Rashed Nawaf, Nasser Al Yafei represented the state of Qatar in the event. The Qatari delegation to the event was chaired by Ahmad Al Obaidli.

Ibrahim Al Khelaifi, Deputy Chairman of National Teams Committee said, “We are proud of our players and their new achievement as they will participate in Junior Davis Cup for the first time”

Al Khelaifi stressed that the federation will provide the players with all possible support to qualify to the next level.

“What was achieved in Sri Lanka will not only motivate the players, but it will also boast the efforts of the federation in its strategy to build strong national teams in all age groups.” Al Khelaifi added.