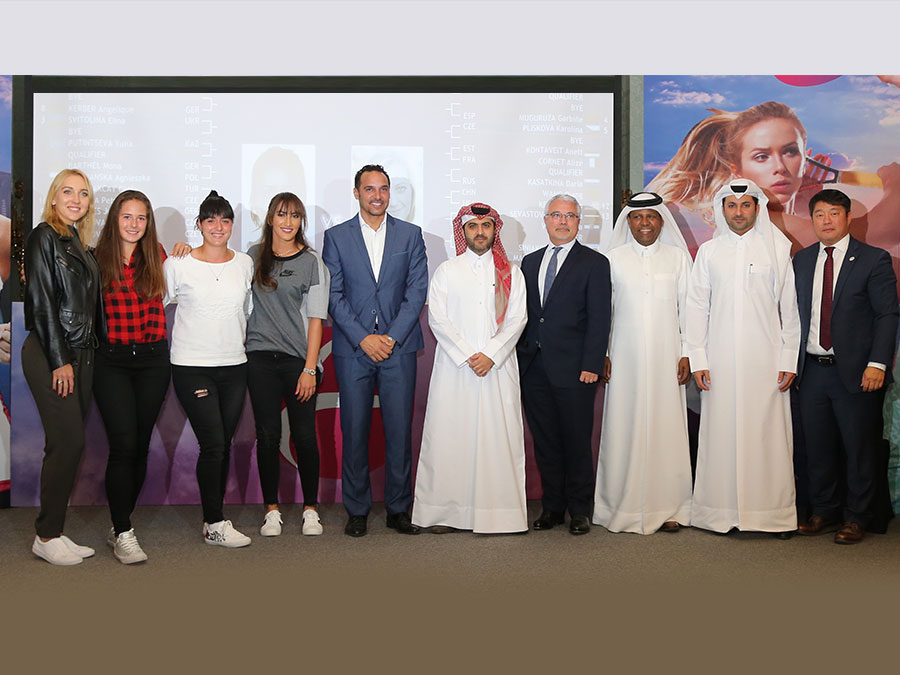 DOHA, QATAR: The draw of the Qatar Total Open 2018 was held at an impressive ceremony at the Fours Seasons Hotel in Doha on Saturday.
The tournament is as glittering as ever as nine of the WTA Tour’s top 10 players, including new world no. 1 Caroline Wozniacki and defending champion Karolina Pliskova, are joined by an incredibly strong field including wildcard Maria Sharapova to guarantee top-quality matches from day one.

Players in attendance include Russian Elena Vesnina, Daria Kasatkina, Oman’s Fatma Al Nabhani and Tunisia’s Ons Jabeur.
In all, 14 of the top 15 in WTA rankings will be fighting for the golden falcon trophy and the substantial prize money at the WTA Premier 5 category event with Venus Williams being the only absentee at the tournament which runs from February 12 to 18 at the Khalifa International Tennis and Squash Complex in Doha.

Tournament Director Saad Al Mohannadi said, “This is probably one of the toughest draw we’ve had in the tournament’s history. It shows how big Qatar Total Open has grown and the importance the players attached to the tournament as it has succeeded in attracting almost all the top players. We are ready to continue to organize the best tournament in this category and we plan to keep raising the bar each year.”
“It was a special field, probably the strongest ever. It’s going to be a brilliant tournament, because the weather is perfect and we have a number of top players,” said Total’s Eon at the event.

The top-eight seeds for the Qatar Total Open 2018 will have to wait until the second round before hitting the courts as they all got a first round bye.

Tournament’s topmost-seed Wozniacki, fresh from winning the Australian Open, is set to face two-time champion Maria Sharapova in round of 16, if the latter wins her first two matches. Sharapova will begin her campaign against a qualifier and she is likely to face Slovakian 14th seed Magdalena Rybarikova in the second round.

Germany’s Angelique Kerber, on the other hand, could face big-serving Sam Stosur or Irina-Camelia Begu in the second round with world no. 11 Johanna Konta or 2016 Doha champion Carla Suarez Navarro projected third-round opponent.
The former world No.1 Kerber has been in fine form of recent having won in Sydney and reached the Australian Open semi-finals.
Defending champion Karolina Pliskova, meanwhile is seeded fifth, and would likely face 2014 winner Simona Halep in the quarters.
Halep, however, is racing against time to be fit enough to play as she is struggling to recover from an ankle injury picked up in her Australian Open final loss to Wozniacki.

The Romanian, who pulled out of weekend’s Fed Cup, will play her second round match against Ekaterina Makarova or Zhang Shuai after a first-round bye.

Meanwhile Al Nabhani, the gold medallist at the Arab Games in Doha in 2011, will have to prove her mettle against 14th seed Magdalena Rybarikova in the first round to indicate how far she’s able to carry the Middle East’s hope at the tournament.

“It’s going to be a very tough match, but I’ll try my best. You never know what’s gonna happen,” Al Nabhani said.
The 31-year-old Vesnina, who will face a qualifier in the first round, is likely to play against 11th seed France’s Kristina Mladenovic if she wins her first round match against a qualifier.

“Some of the second-round pairings at Qatar Total Open could well be the semifinals of other tournaments and Grand Slams,” said Vesnina. “It’s going to be a very strong tournament, you know. It’s very prestigious and it would be great to win here. It’s the beginning of the year and everybody is fresh and hungry,” she added.

Tennis fans are indeed in for a good treat as the main event begins on Monday February 12 considering the array of talents on display at this year’s tournament.