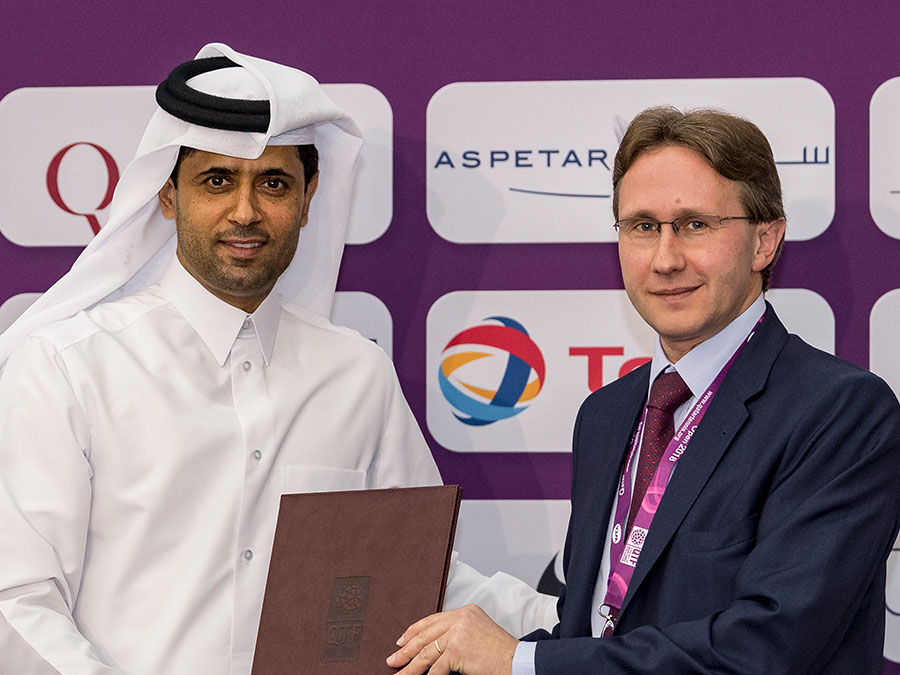 Total EP, title sponsor of the Qatar Total Open, on Saturday renewed its sponsorship agreement for another three years.

Addressing a press conference at the Khalifa International Tennis & Squash Complex, Khelaifi said: I would like to express my gratitude to H. H. Sheikh Tamim Bin Hamad Al Thani, the Emir of the State of Qatar, for the great support he shows for the game of tennis in Qatar, also thanks to our valuable sponsor Total EP, the Qatar Total Open has over the years redefined women’s tennis not only in Qatar but in the region. The annual WTA Premier 5 tournament has raised the bar so high that other tournaments in its category are finding it difficult to match its standards. Qatar Tennis Federation is extremely delighted with our partnership with Total EP and the great achievements we’ve had over the years.”

“Total’s partnership with QTF is a matter of pride for us as it has been a relation built from its roots. We were there when the first tournament started and will remain until for as long as time allows. It is also our way at Total to support the efforts made by the QTF and the state of Qatar in general in organizing world class sporting events.

This tournament is a great achievement not only because of the world class players present and successful organization but because it reminds us that sports specially tennis is loved and played by many and brings us all together.

I wish to express our gratitude to H. H. Sheikh Tamim Bin Hamad Al Thani, the Emir of the State of Qatar, for his continuous confidence in Total, and to H.E. Nasser Al Khelaifi, President of Qatar Tennis Federation, as well as to Mr. Tariq Darwish, Mr. Saad Al Mohannadi, and all the members of the Organizing Committee of the Qatar Total Open”, said Laurent Wolffsheim, Managing Director of Total E&P Golfe and Group Representative.

Total EP has been the title sponsor of the WTA Premier 5 tournament, which has continued to attract the biggest names in women tennis annually, since its inception in 2001.