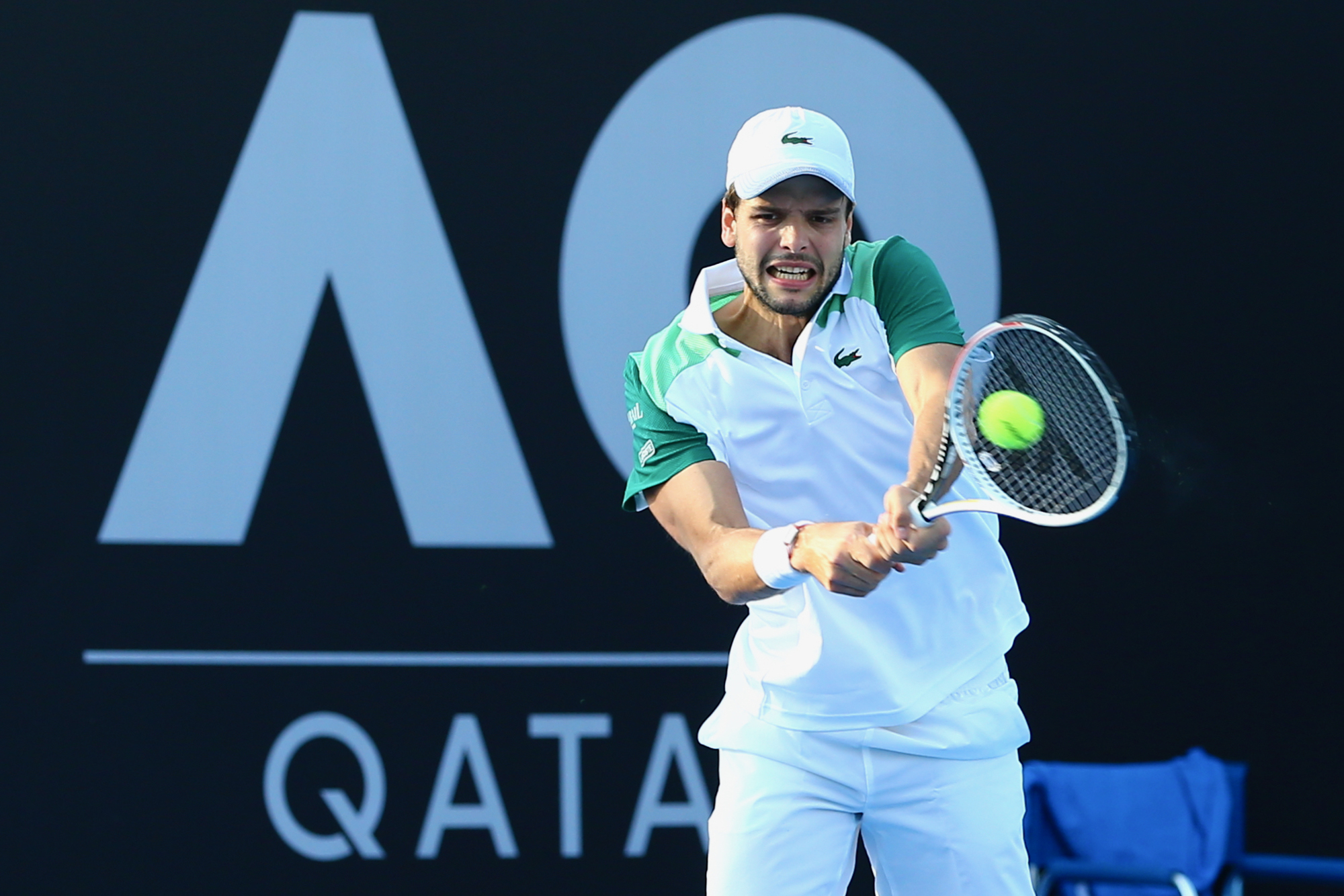 QTF-DOHA/ Tournament’s top-seed Gregoire Barrere of France withstood an unexpected pressure from Czech Republic’s Zdenek Kolar to power home to victory in straight-sets 7(7)-6(5), 6-3 in their first-round match of the ongoing men’s qualifiers of the 2021 Australian Open being held at the Khalifa International Tennis & Squash Complex in Doha.

The 26-year-old Frenchman, who made the second round of last year’s Australian Open, needed all of 96 minutes to dispatch the 224-ranked Kolar in the thrilling encounter.  Barrere, a winner of three ATP Challenger Tour singles titles and six ITF Futures singles titles, hit five winners and won 60 percent of breakpoints on his way to victory.

In the other match of the day, tournament’s second-seed Hugo Dellien of Bolivia dispatched Chile’s Alejandro Tabilo in just 68 minutes, winning in straight-sets 6-1, 6-0 to advance into the second round.

The 27-year-old World No. 111, who defeated Carlos Berlocq, Guido Andreozzi and Roberto Carballés to reach the quarters of the 2019 Rio Open to become the first Bolivian player with an ATP win since Mario Martínez at French Open in 1984, enjoyed a somewhat easy ride over his Santiago-resident opponent under a pleasant weather on Court 2 on the day.

En route his victory, the former Junior’s World No.2 fired in three aces to his opponent’s one, winning 72 percent of his first serves and 67 percent on second serves as he booked a second-round face-off against Australia’s Andrew Harris.

The 26-year-old Aussie, ranked 232, had emerged victorious after a hard-fought battle against Belgian Ruben Bemelmans, winning 2-1 (6-4, 5-7, 6-3) in a gruelling encounter that lasted the whole of 2 hours and 30 minutes.

Tuesday’s second-round encounter will be the first between Dellien and Harris. The winner is set to face either 141-ranked Carlos Alcaraz of Spain – the 17-year-old who won three ATP Challenger titles in 2020 and was voted the ATP Tour’s Newcomer of the Year; or Russia’s Evgeny Karlovskiy, ranked 258, for a chance at one of the available 16 slots for the main draw of the season-opening Grand Slam.

Meanwhile, former world No.10 Ernests Gulbis would not be making an appearance in Melbourne this year after crashing out in the first round of the qualifiers on Monday. The 32-year-old Latvian was beaten 7(7)-6(2), 6-3 by lesser-known Blaž Rola of Slovenia.

Gulbis, who in 2010 won his first ATP Tour singles title in the Delray Beach after defeating Ivo Karlović in the final, was one of the pre-tournament favourites. His exit on Monday followed the trend of some major upsets being recorded at the event, which is being held outside of Australia for the first time in its 116-year history since it began yesterday.

One of the heralded stars Lorenzo Musetti lost 2-1 (6-3, 1-6, 4-6) to Dutch Biotic van de Zandschulp yesterday while former world No.5 Tommy Robredo, an Australian Open 2007 quarterfinalist, was sent packing by France’s Antoine Hoang in straight-sets on the same day.

Former World No. 17, Bernard Tomic, in the meantime, is two wins away from an 11th Australian Open appearance after battling for more than two hours to take his first-round qualifying match.

Fetching his own balls without ball kids and playing before no crowds, a focused and determined Tomic outlasted Slovakian Jozef Kovalik 6-4 3-6 6-4 in a sweat-soaked baseline grind on Monday.

The Aussie broke Kovalik in the first and last games of the epic encounter and fought many mental and physical demons in between.

Without a top-level tour win in 18 months, and having earned just $US23,684 during his COVID-ravaged 2020 campaign, Tomic has plummeted to No.228 in the rankings.

Tomic is set to face fellow Aussie and wildcard entrant Tristan Schoolkate in the next match ahead of the final pitch for Melbourne.

Live scoring and live streaming of the tournament are available on ausopen.com and the AO app.